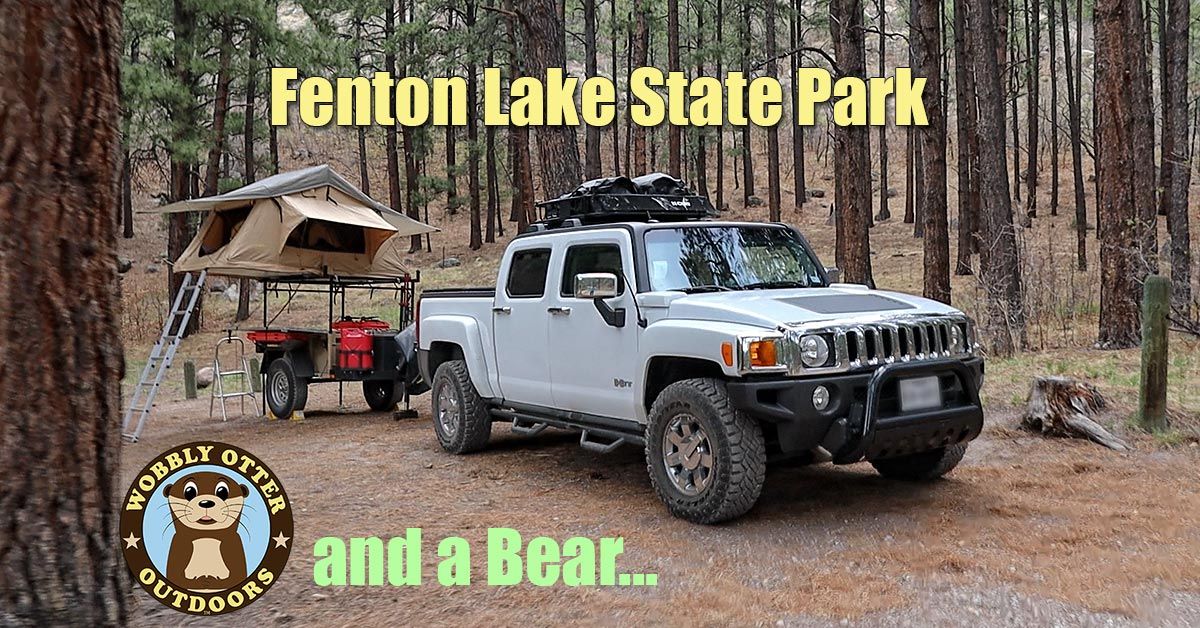 Tonight we camp at Fenton Lake State Park... Or at least that's the plan. Everything is picture perfect until we heard the bear.

The video below tells the full story.

Thank you for watching. We hope you'll subscribe to get the best Wobbly Otter adventures, how to's, and gear reviews delivered directly to you.

Fenton Lake State Park is in the Jemez Mountains of New Mexico. The elevation is 7,650 feet (2,332 meters).

We camp in a site at the far end of the park. The site we choose is about 50 yards up hill from Rio Cebolla (seh-BOY-uh) which is a small stream that flows through the Park. No one else is camping in the area.

As I put stuff up after supper, Bill is sitting on the picnic bench - listening.

He is hearing twigs and sticks snapping down near the little stream. There is no moon tonight and it is dark now.

We speculate the most likely critters that could be making the noise. The top 2 contenders are a raccoon and a bear.

Bill shines his head lamp toward the noise and it reflects off of two eyes that are very low to the ground so we figure it's drinking from the stream. It's too dark and too far a way to see the shape or size of the animal.

It raises its head, turns to its right, and starts walking slowly. It's not a raccoon. The eyes are way too high off the ground for that. We can still see its left eye reflecting the light of the head lamp. It's head lumbers up and down slowly as it walks.

Bill walks down the road to where it meets the stream to get a better vantage point so he can identify the animal.

Walking back, when he is within ear shot he says, "Lucky us! It's a bear. A black bear."

We make lots of noise. We play Aerosmith really loud. The bear continues to forage along the little stream. It is never agressive and it never came toward our campsite. We never saw the bear dig in the trash dumpster. We do have bear spray with us.

But, we aren't familiar with the bear. Since the bear isn't being agressive, it would probably be safe to stay the night. We have a good bit of driving to do the next day. We decide if we stay that we won't be able to sleep simply because the bear is there. We leave the gear sealed and locked inside George and leave the roof top tent all setup on top. We drive to a nearby town to have a good-night's sleep in a hotel.

The next morning, as we are driving through Fenton Lake State Park back to our camp, we visit with one of the Park Rangers. He acknowledges that there have been a couple of different bears that make the Park their home. One even frequented the area behind their Ranger Station. None of the bears have approached people or caused any trouble. He thanks us for letting him know and for not approaching the bear to take its picture.

We return to an intact camp and tent. Yay! We close up the tent, hook up George and head out.

If you'd like to support Wobbly Otter Outdoors all you have to do is watch our videos. Okay, here are some other ways to support us too.

Disclosure: Some of the product links on this page are affiliate links, and at no additional cost to you, we may earn a small commission if you make a purchase after clicking through the link. By using these links you help support Wobbly Otter Outdoors. Thank you.

We appreciate your interest in, and support of Wobbly Otter Outdoors.