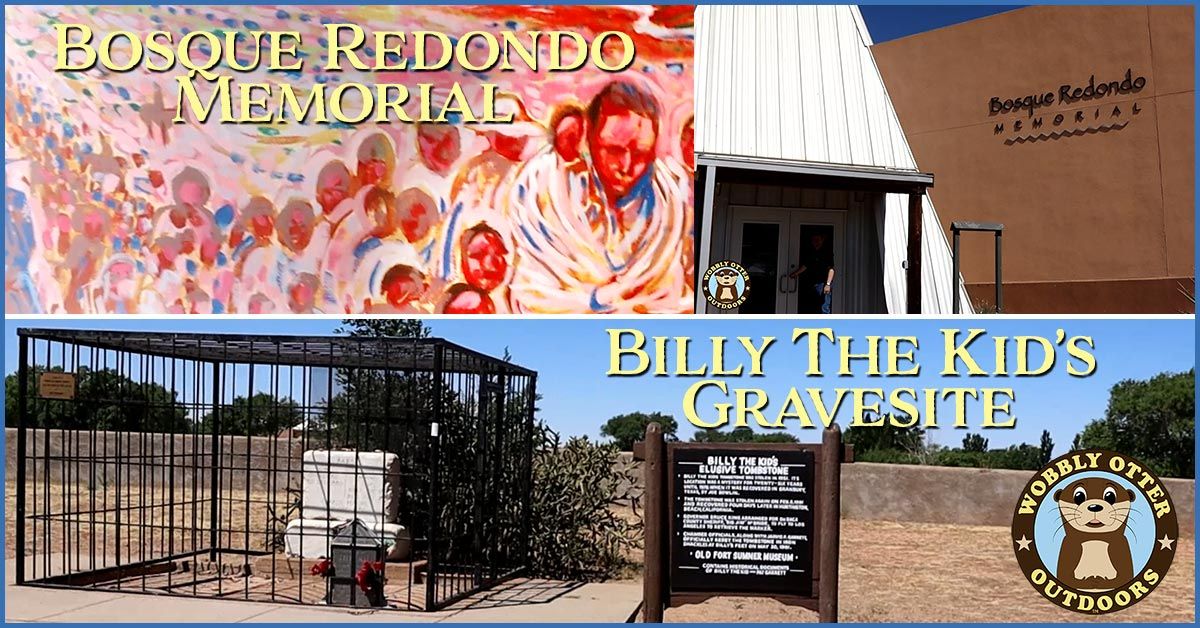 We're taking a look at the amazing history, nature, and scenery in and around the lands of the Ancestral Puebloans and the Navajo Nation.

Early in our trip, we travel through Fort Sumner, New Mexico and decide to stop in and see the Bosque Redondo Memorial and Billy the Kid's gravesite.

Thank you for watching. We hope you'll subscribe to get the best Wobbly Otter adventures, how to's, and gear reviews delivered directly to you.

The Bosque Redondo Memorial opened June 4, 2005. The memorial is shaped like a Navajo hogan and an Apache teepee and provides an interpretive trail and in-depth information about the history of Fort Sumner and the Bosque Redondo Reservation.

Fort Sumner was built in 1862 by the U.S. Government to provide protection for settlers in the Pecos River valley. The 1,600 square mile Bosque Redondo Reservation was established in 1863.

During search and capture, many Navajo were killed, their livestock killed, their crops and orchards burned, their villages destroyed, and their water sources contaminated. On some 53 marches from Fort Defiance, 11,500 Navajo were forced to walk the 400 miles to Bosque Redondo. About 8,500 reached the reservation. Many died along the way, some escaped, and some were captured by slave traders.

The Bosque Redondo Reservation was a failure.

More than 8,500 Navajo and more than 400 Mescalero Apache were forced to live in Bosque Redondo. The Army had only planned for 5,000 to be living on the Bosque Redondo Reservation, so there was insufficient food from the start. There was no clean water. The water from the nearby Pecos River was full of alkali that caused severe intestinal problems. Disease spread quickly through the reservation.

In 1865, the vast majority of Mescalero Apache escaped using their well-organized escape plan.

On August 30, 1869, Fort Sumner was abandoned, and all government property was removed or sold.

The buildings of Fort Sumner were auctioned off in 1870.

They were purchased for $5,000 by wealthy rancher and cattle baron, Lucien Maxwell. In the spring of 1871, Maxwell moved into the old Fort Sumner buildings.

At one point, Lucien Maxwell owned more than 1.7 million acres across the U.S., and he was one of the largest private landowners in United States history - along with Ted Turner and Thomas Catron.

Lucien Maxwell passed away on July 25, 1875, and is buried in the Old Fort Sumner Cemetary.

Lucien Maxwell rebuilt the Fort Sumner officer's quarters into a 20-room house. Lucien's son, Peter, inherited the house. Peter befriended Billy the Kid until Peter learned that Billy was in a relationship with his little sister. In that house, on July 14, 1881, Sheriff Pat Garrett shot and killed the outlaw, Billy the Kid. Billy the Kid is buried in the Old Fort Sumner Cemetery, as is Peter Maxwell.

If you'd like to support Wobbly Otter Outdoors all you have to do is watch our videos. Okay, here are some other ways to support us too.

Disclosure: Some of the product links above are affiliate links, and at no additional cost to you, we may earn a small commission if you make a purchase after clicking through the link. By using these links you help support Wobbly Otter Outdoors. Thank you.

We appreciate your interest in, and support of Wobbly Otter Outdoors.